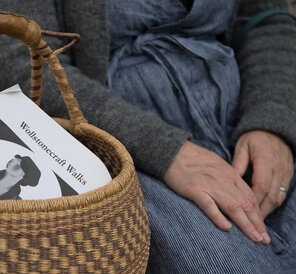 The extract by Mary Wollstonecraft you have just heard was from an essay called ‘On Poetry’ which she wrote in response to criticism from her lover William Godwin about the lack of formality in her style. Very little of this work remains because Godwin destroyed this and others of her works that didn't fit his view of what her legacy should be after her death. However, when Mary and Godwin's daughter, Mary, and the poet Percy Shelley were falling in love they would obsessively read a remaining copy of the essay they have found over Wollstonecraft’s grave. The ideas in it inspired the young writers and through them became the backbone of the ideology of the Romantic movement, another debt we owe to Wollstonecraft's remarkable vision, prowess and resilience.

Mary Wollstonecraft opened a school for girls near the site in 1784. This plaque celebrates that Wollstonecraft lived and worked on the Green at a formative time in her life and her experience of running a school on the Green inspired her to write ‘Thoughts on the Education of Daughters’ (1786). The school may have been on the east or south side of the Green as Wollstonecraft notes in a letter that the church and Dr Price’s house could be seen from a school window. The plaque is on the back of Newington Green school where we have just been.

In stark opposition to her father Godwin and his attack on her mother's literary contributions, when Percy Shelley died Mary Shelley made time within her own writing career to compile, complete and edit all Percy's remaining output, helping his legacy to endure and the Romantic movement's ideals and principles to be able to continue influencing us to this day. As Joanna Russ points out in ‘How to Suppress Women's Writing’;

When the memory of one's predecessors is buried, the assumption persists that there were none and each generation of women believes itself to be faced with the burden of doing everything for the first time. And if no one ever did it before, if no woman was ever that socially sacred creature, "a great writer," why do we think we can succeed now?

Thanks to the work of second wave radical feminists in the 70's and 80's, Mary's influence in history, politics and literature has been rediscovered and we can once again celebrate her part in the major movements of her time, nationally and internationally. We think that calls for a toast!

Here our live audiences were greeted by drag king Don One who hosted a birthday celebration for Mary, at which everyone raised a glass, had a slice of birthday cake and were invited to read quotes from illustrious women like Maya Angelou, bell hooks, Radcliffe Hall and Michele Obama! You can recreate this by heading inside for a drink or bite to eat and reading these quotes (that can be found here) and treating yourself to a bit of inspirational me time!

Thank you so much for completing this Wollstonecraft Walk and celebrating Mary, our remarkable Green and the advances of feminism – onwards and upwards!