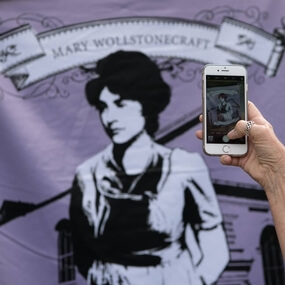 Mary on the Green memorial site

In the late summer of 2007 Fragments & Monuments hosted a picnic and outdoor screening where you are walking of the The Wollstonecraft Live Experience! films on the Green with live music performed by the famous Deidre Cartwright Trio.

In 2019 local company Scary Little Girls joined forces with Fragments & Monuments to celebrate Mary and the Living Literature Walks were held here funded, by the Heritage Lottery and supported by Stoke Newington Literary Festival. At this point in the walk the audience listened to Wollstonecraft’s words as interpreted by playwright by Kaethe Fine in the specially composed soundscape by composer Alastair Gavin and were given postcards encouraging them to give generously to the Mary On the Green memorial fund.

...why should not one woman acknowledge that she can take more exercise than another ? or in other words that she has a sound constitution? And why, to damp innocent vivacity, is she darkly to be told that men will draw conclusions which she thinks little of?

Let the Libertine draw what inference he pleases but I hope (whispers) Wollstonecraft Live... that no sensible mother with restrain the natural frankness of youth by instilling such indecent cautions.

...Women ought to endeavor to purify their heart, but can they do so when their uncultivated understandings make them entirely dependent on their senses for employment and amusement? When no noble pursuits set them above the petty vanities of the day, or enables them to curb the wild emotions that agitate a reed over which ever passing breeze has power.

Fondness is a poor substitute for friendship! (rewind)

It appears to me impossible that I should cease to exist or that this active, restless spirit, equally alive to joy and sorrow should be only organized dust, ready to fly abroad the moment the spring snaps or spark goes out. (whispers) Wollstonecraft Live... Surely something resides in this heart that is not perishable.
And life is more than a dream...